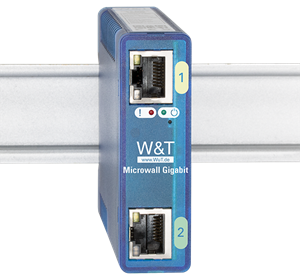 Wish for something!
Your suggestions for improvement and additions

The Microwall moves sensitive components or sub-networks into a separate island network and in that way separates it from the higher level corporate intranet. Connections over the Microwall must be given an express release using rules based on source/destination IP and the needed TCP/UDP port numbers. Communication with documented and/or undesired services is prevented and damaging events such as overload are kept away from the island.

Similar to a traditional DSL internet connection, the entire island network is incorporated into the network there via an IP address for the intranet page. No access into the routing concept of the intranet is required. Operating multiple island networks with the same IP areas is also possible in this mode. Machine and systems builders are therefore able to run internal networks with a uniform series IP configuration - no cumbersome modifications to the customer infrastructure.

The Microwall acts as a traditional router and the island network is made known in the intranet for example in the form of static routes.

The Microwall rules are managed simply and clearly using Web-Based management and are consistently whitelist-based. This means any communication which is not expressly released in the form of a rule is blocked.

Housing and other data: