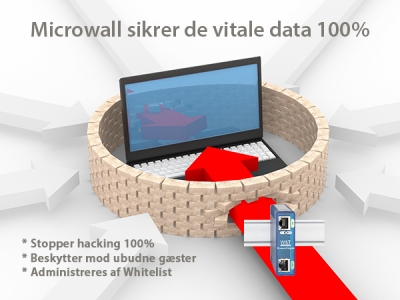 W&T Microwall:Small firewalls protect devices and machines in the networkMicrowall Gigabit from the Wuppertal network specialist Wiesemann & Theis marks the start of a new selection of user-friendly security products for industry and manufacturing. The small firewall isolates potentially vulnerable or non-secure devices and machines in their own network segments. Communication with these secure islands in the network is limited to the cases necessary to ensure operation. This effectively prevents attacks on open TCP or UDP ports as well as unwanted data connections.

Perimeter firewalls analyze incoming traffic and filter emails, malicious web pages or external connection attempts at the interface between the local network and the Internet. But if an attacker succeeds in infecting a computer inside the network, he can move freely from there to the network.

An impressive example of this was the WannaCry crypto tower in 2017, which paralyzed not only hospitals and universities but also the media boards in Frankfurt's station. WannaCry spreads over a vulnerability in the software that allows file access to other computers on the Windows network. Each computer with this vulnerability was directly accessible to neighboring computers. So WannaCry could spread in no time in the affected networks.

Effective protection against this type of attack is provided by splitting networks into segments limited in their ability to share data. The connection points monitor and control the permitted traffic. A worm scattered within such a segment can damage neighboring systems. However, it usually does not manage to move across segment boundaries.

In medium and large corporate networks, the IT department is responsible for breaking the network into segments for the different departments. For example, the administration's network segment is separate from R&D or production.

With the introduction of Microwall, Wiesemann & Theis follows a similar approach: Instead of merely creating segments for entire departments, systems that are potentially vulnerable or motionless are isolated in a separate network segment using Microwall. These include e.g. IoT devices and intelligent home workers - but also CNC milling or old control computers.

Each functional unit is assigned its own network segment - a secure island where allowed data traffic with this segment is limited to those absolutely necessary for operation. If a milling machine e.g. Accepting production data via TCP port 9000, Microwall only allows connections through this port. If an attacker is now trying to exploit a vulnerability in another service, the connection is already blocked by Microwall and logged. On the other hand, devices on the same island can continue to communicate with each other unhindered.

Microwall is a 2-port firewall router. Configuration is straightforward via a web-based user interface. After setup, the configuration interface can be permanently disabled, requiring physical access to the reconfiguration device. Microwall is now available at a net price of 398.00 € / 2985.00 DKK. Commercial users can test the product for free for a period of four weeks.

Wiesemann & Theis GmbH was founded in 1979 by Reinhard Wiesemann and Rüdiger Theis. With 50 employees, the company produces microcomputer and network technology in Wuppertal. In 2001, Wiesemann & Theis introduced the first industrial temperature sensor with network interface to the web thermometer and has more than fifteen years of industry experience 4.0 and things.

Active Communication has been a distributor for W&T since 1992 for Denmark and since 2002 also for Sweden, Norway, Iceland. W & T's products are extremely user-friendly and reliable at a competitive price.