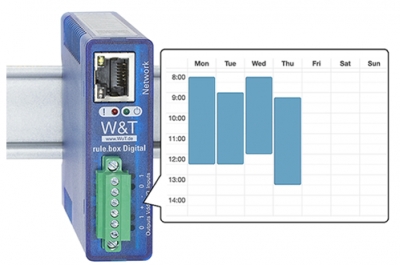 Switch up to eight 230V circuits via network Wuppertal-based Wiesemann & Theis GmbH has expanded its range of network-based 230V remote control connectors with two products with potential-free closing and switching contacts for load currents of up to 16 amps.

The industrial network relays are installed on a 35 mm DIN rail. They can be accessed and controlled over the network. In addition to the web interface and apps for iOS and Android, various communication protocols are available for data access: Modbus / TCP, OPC, MQTT and REST support integration with Industry 4.0 and SCADA applications. Via TCP, UDP, SNMP and FTP, integration into other network products is possible.

Web IOs meet high security requirements. The individual network services can be activated independently. For each operating mode it is possible to determine which outputs are allowed to switch. An overview page contains information about active services and assigned channels. Web interface access and email sending are TLS encrypted upon request.

Active Communication has been a distributor for the Nordic countries for Wiesemann & Theis GmbH since 1992. W&T was founded in 1979 by Reinhard Wiesemann and Rüdiger Theis. With 50 employees, the company produces microcomputer and network technology in Wuppertal. In 2001, Wiesemann & Theis introduced the first industrial temperature sensor with network interface with the Web thermometer and has more than fifteen years of experience in the areas of Industry 4.0 and Internet of Things.

More in this category: « W&T Microwall