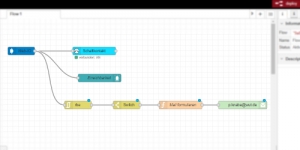 Fast - user-friendly - smart programming Node-RED is a flow-based programming tool, originally developed by IBM's Emerging Technology Services team and is now part of the JS Foundation. Our products from Wiesemann & Theis (W&T) will now be managed by Node-RED via rule.box. That is why this introduction of this user-friendly software called Node-RED. Under "read more" are shown three TABs - one with the Node-RED story - one with videos showing how easy Node-RED is to use - one that tells about the rule.box containing Node-RED. W&T will keep coming up with interesting news, which I look forward to bringing here.

In the 1970s, J. Paul Morrison invented flow-based programming, which is a method of describing an application's behavior in a network of "black boxes" or "nodes" as they are called in Node-RED. Each node has a well-defined purpose; it receives some data, it does something with that data, and then that data is forwarded. The network is responsible for the flow of data between the nodes.

The above model is very suitable for a visual representation of Node-RED and makes the process clearer to users. If you can break down a problem into clear steps, you can look at a stream and get a sense of what it is doing; without having to understand the individual code lines within each node.

Node-RED consists of a Node.js-based runtime that you enable in a web browser to access the flow editor itself. In the browser, you create your application by dragging nodes from your palette to a workspace and start connecting them. With a single click, the application is distributed back to the runtime where it is run.
The nodes palette can be easily expanded by installing new nodes created for specific applications, and the streams you create can be easily shared as JSON files.

Development of the Node-RED software began in early 2013 as a side project by Nick O'Leary and Dave Conway-Jones of IBM's Emerging Technology Services group.
What began as a proof-of-concept for visualizing and manipulating mappings between MQTT topics quickly became a much more general tool that could easily be expanded in many different directions.
It opened in September 2013 and has been developing in the open environment ever since, culminating in being one of the founding projects of the JS Foundation in October 2016. Now Wiesemann & Theis has also taken over Node-RED and will be offering developers this software in the product rule.box, which launches early 2020.

Node-RED tutorial for Industrial Internet of Things (IIoT). In Part 1 of this, Opto 22's Terry Orchard explains the basics of Node-Red to show you how to get started building your own IoT application. Terry provides step-by-step instructions on how to create your own simple project or flow.

How to Get Started with MQTT

In this tutorial you will learn how to get started using MQTT with Node-RED. IoT is about pairing devices. MQTT is an easy and public subscription based protocol that forwards data through a central broker. Terry Orchard will guide you through the following: - How the MQTT Model Works - What is an MQTT Broker - The Pros and Cons of MQTT - How to Use MQTT to Turn on a Digital Output - MQTT Node-RED Node

Hope this provided some insight into how Nod-RED works and some of its capabilities.

Our supplier Wiesemann & Theis has developed the rule.box, which contains Node-RED prepared to implement a number of Web IOs. Get started with Node-RED by ordering a free trial for 30 days.

Wiesemann & Theis have seen the possibilities of implementing Node-RED in Web-IO solutions by launching the device rule.box # 55920.
Implement automation tasks with the pre-installed graphical development tool Node-RED. Determine the data flow between input and processing nodes by dragging connections in the browser-based editor. Using pre-installed nodes, you can read and control Web IOs, web thermometers and servers from Wiesemann & Theis. The extensive range of nodes that can be added later enables both expansion of processing capabilities and connectivity of devices from other manufacturers. Rule.box runs the created streams reliably while saving energy. It is also possible to integrate non-public nodes upon request.